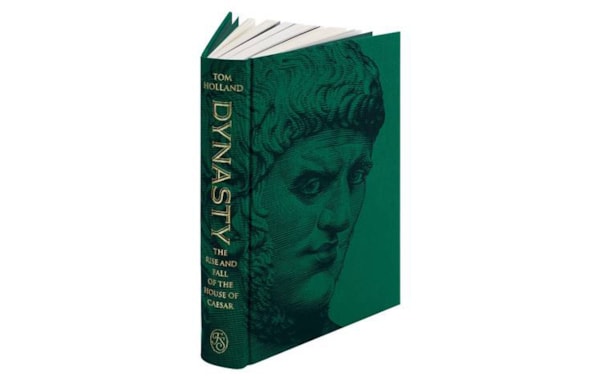 A raft of new titles covers the ancient world and modern struggles.

Dynasty chronicles: ‘The first wicked century of the Roman Empire’ and the lives of the first five Roman emperors: Augustus, Tiberius, Caligula, Claudius and Nero. With a novelist’s verve and a historian’s mastery of detail, Tom Holland lays bare the glamour and decadence of Rome, and the unrelenting brutality beneath its veneer of civilisation. This lavishly illustrated edition from The Folio Society includes a colour frontispiece plus 24 pages of colour images detailing frescoes, sculptures, mosaics and coinage as well as complete family trees and 11 newly hand-drawn maps specially crafted for this edition. 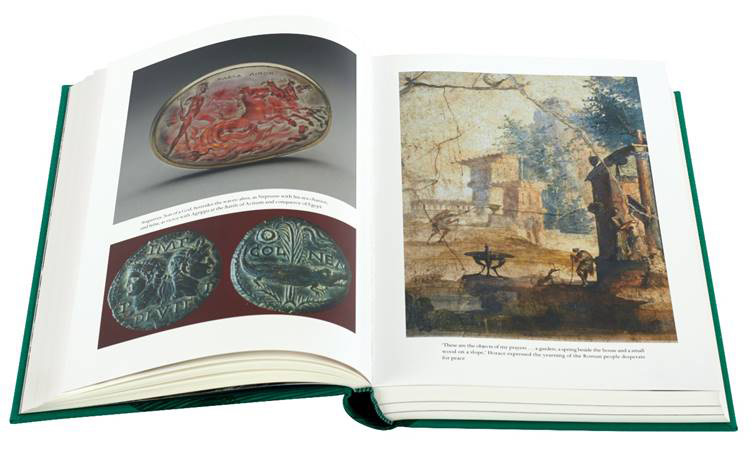 Drawing on rigorous scholarship, Holland immerses the reader in all the contradictions of Imperial Rome – such as how the women of the Julio-Claudian dynasty could steer the course of history, even in a rigidly patriarchal society where a father literally possessed the power of life and death over his family.

Holland creates vivid portraits of the five Caesars: Augustus, the master strategist who tightened his grip on power while affecting to shun it, and the sly, aristocratic Tiberius, entrusting Rome to the tyrant Sejanus while indulging in orgies on the island of Capri. Holland is unsparing about the psychotic cruelty of Caligula, and depicts his successor Claudius as a surprisingly ruthless, calculating figure. The line ends with the mad narcissist Nero – responsible for untold violent deaths, including those of his own mother and wife, and possibly for the burning of Rome; yet mourned by a people dazzled by the ‘wonder and horror’ that radiated from the JulioClaudian dynasty. 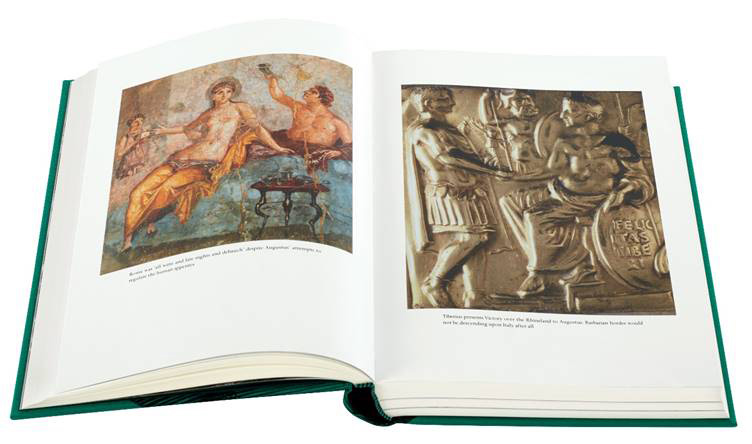 Handsomely presented in a distinctive green binding bearing an image of Nero designed by Kent Barton, this volume is in series style with other Folio titles written by Holland, including Persian Fire.

Bound in printed and blocked cloth with a design by Kent Barton. Set in Spectrum with Castellar as display. 480 pages. 25 pages of colour plates. Plain slipcase. 10in x 6.75in.

This edition is available exclusively from The Folio Society 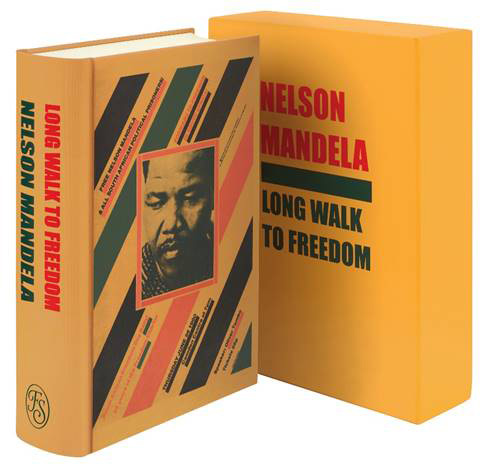 Working with archive originals of images from the paperback and illustrated editions of Mandela’s memoir, The Folio Society has curated a revised selection of 51 black-and-white photographs, published as a collection in this format for the first time. Prominent South African photographers such as Peter Magubane and Jürgen Schadeberg supplied original images for high-resolution reproduction, while the frontispiece portrait is from Allan Tannenbaum’s personal archive; an iconic image from Mandela’s 1994 inauguration. A map of South Africa is also included, carefully redrawn for this edition and reproduced as spectacular endpapers. 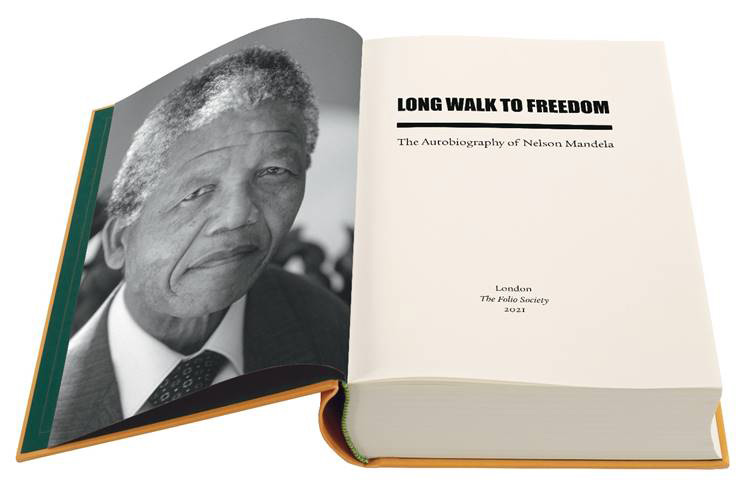 Politician, campaigner, humanitarian, family man and descendent of the Thembu royal house, Nelson Mandela is, above all, remembered as one of the world’s great moral leaders. In Long Walk to Freedom, Mandela tells the story of his extraordinary life in his own words, from his childhood in the Eastern Cape, to his political awakening, activism, incarceration, and finally his release, 27 years later, into the dawn of a new South Africa in which he would play a pivotal role. Long Walk to Freedom is a political memoir like no other. In between the heart-breaking history of a country torn apart by institutionalised racial segregation, there lies a human story: a man divided by loyalties and contradictions, his path to greatness littered with mistakes and regrets and his family’s suffering as his dedication to the cause grew.

When Mandela was finally released from prison, the world watched closely to see what type of man emerged. He was dignified and strong, working with President F. W. de Klerk to bring about a peaceful end to the apartheid regime, for which the two men were jointly awarded the Nobel Peace Prize in 1993. His memoir is an extraordinary social and historical record of this turbulent time and one of the most important non-fiction works of the late 20th century. 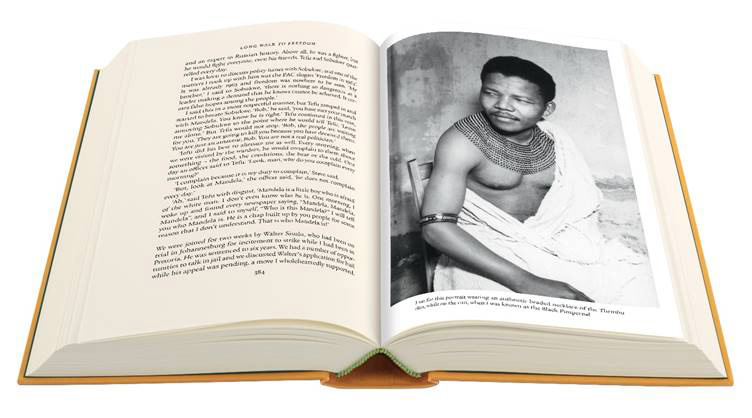 This edition available exclusively from The Folio Society. 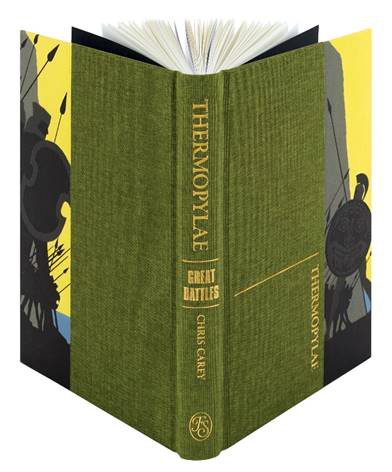 The latest addition to The Folio Society’s Great Battle series, Thermopylae is a masterful account of the Greeks’ celebrated stand against the Persians and its cultural legacy. It includes 16 pages of colour images, featuring sculpture, ceramic art, painting and public monuments inspired by the battle. With landscape photography, hand-drawn maps by Kevin Freeborn and battlefield plans, this is the authoritative companion to one of the most significant episodes in classical warfare.

In this gripping study, classical historian Chris Carey chronicles a battle he describes as ‘the very first last stand in world history’. In 480BC, a desperately outnumbered Greek army faced a massive force of Persian invaders in the narrow pass of Thermopylae – miraculously holding their ground for three days before being driven into retreat, their commanders and rear-guard slaughtered. Carey explores how Thermopylae, like Waterloo, Dunkirk and the Alamo, became a byword for heroism in the teeth of defeat. 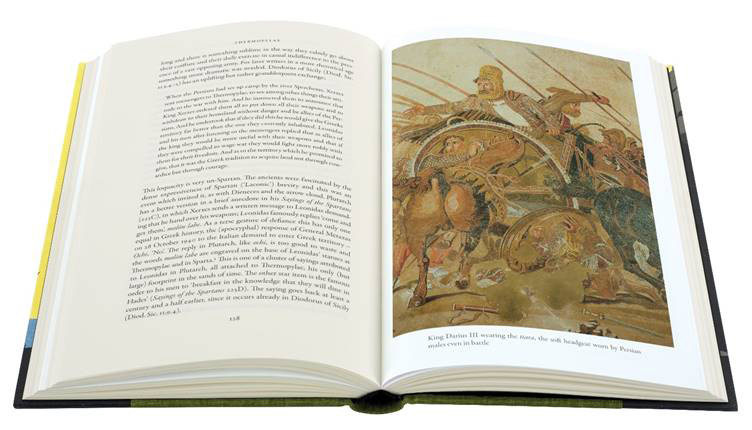 Carey brings a keen, forensic intelligence to bear on the writings of Herodotus and the few other sources that exist, tackling long-disputed questions: were there really just 700 Greeks, facing a million-strong Persian army? He shows how the story captured imaginations in both the ancient and modern world, inspiring works of literature, great speeches, monuments and Hollywood blockbusters – and why figures throughout history have tried to steal some glory from the doomed King Leonidas and his valiant Spartans.

Thermopylae is a worthy addition to The Folio Society’s Great Battles series, selected and edited by the distinguished military historian Hew Strachan. Each book is written by an expert in its field, drawing on the latest research to revisit and reassess the world’s most iconic military engagements. 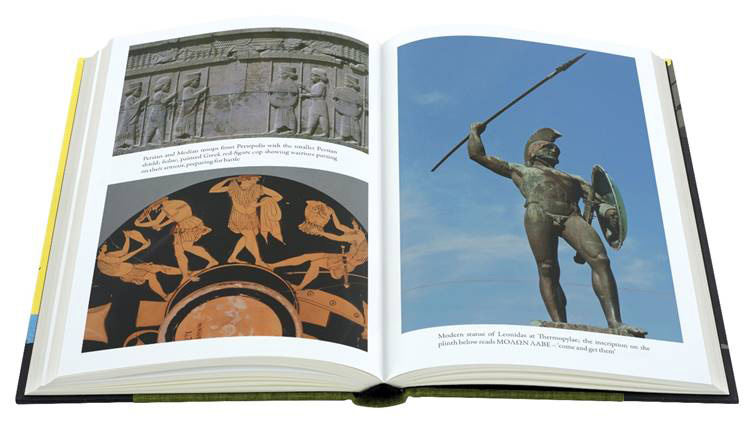 Available exclusively from The Folio Society.