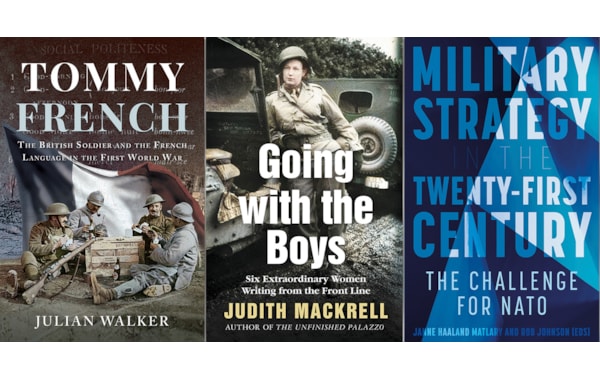 There are three talks in October at the National Army Museum, starting with Going with the Boys, which concerns six female journalists reporting from the front lines. For centuries, war correspondence has been a vital factor in boosting or ruining the morale of nations. Journalists and reporters have often tried to get as close to the action as possible in order to give a true account of battlefield events. In this exciting talk, Judith Mackrell explores the lives of six extraordinary women who not only faced the difficulties of reporting from the front lines of World War II, but also had to contend with stigma and prejudice. The talk is free but you need to book a ticket on the www.nam.ac.uk website, or you can watch online. It is being held at 12noon on 1 October.

The second talk is on 8 October in which Dr Rob Johnson sheds light on the military risks and threats facing NATO today and the strategies needed to confront them. In an era when European states seek to de-escalate and avoid armed conflict, and where politicians fear the consequences of protected operations, does military strategy have any relevance? Join Dr Robert Johnson as he discusses the current military risks and threats for Nato from a military strategy vantage point. He will consider what strategies are needed and explore the varied challenges that face NATO today. The talk is at 12noon and while free does need to be booked to attend in person. You can also watch online.

The final talk for October is Tommy French, in which Julian Walker examines the experiences of British soldiers in France during World War I and the special slang they invented in order to cope with their situation. For British soldiers, WWI provided many challenges. Among the less expected ones was their struggle to communicate with their French allies.

Over four years of fighting, British soldiers would develop an astonishing slang, some of which still brings the conflict to mind whenever it is heard today. In this talk, Julian Walker will examine British soldiers’ initial views on France, how they came to develop relations with both French soldiers and locals, and how both positive and negative encounters led to the development of phrasebooks and a need to teach French to prospective soldiers. As with the others, a free ticket needs to be book to attend in person or you can listen online.