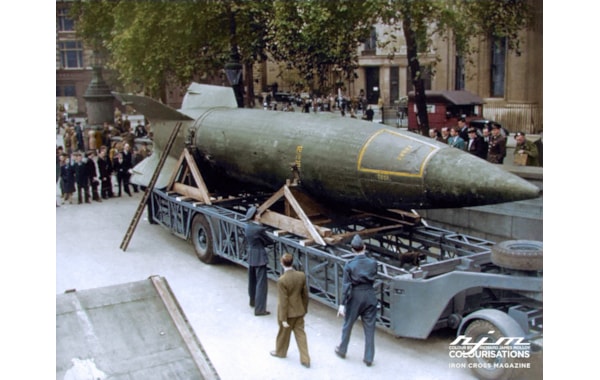 A captured V2 is exhibited in Trafalgar Square, London, in September 1945 – allowing Londoners a close-up view of the weapon which had terrorised the city for many months. (Colorised by Richard J Molloy, colourisation artist for Iron Cross magazine)

In Iron Cross magazine #9 we will be featuring a superb feature by conflict archaeologists, the brothers Sean and Colin Welch, on their archaeological examination of a V2 impact site at Marden in Kent. It is also a story linked to our cover illustration by the talented Keith Burns.

The crater caused by the explosion at Marden was backfilled and cultivation continued over the site in the post war years. However, the recent forensic examination of the site revealed a number of truly remarkable discoveries which were all carefully recorded, catalogued, conserved and analysed. This detail even allowed the archaeologists to discover which companies and organisations had constructed parts of the Marden V2.

In the case of the Marden rocket, it exploded harmlessly in open countryside during March 1945 and caused minimal damage and no casualties. However, that was not the case with other V2 impacts which struck the intended target – London. In those instances, death and destruction was colossal as these weapons rained down from September 1944 into early 1945 in attacks which the government called ‘Big Ben’ incidents. Initially, the government were unwilling to acknowledge what these huge and sudden blasts were for fear of alarming the population since there was defence against these weapons. To begin within, the cover story was that they were gas explosions, although after there were so many explosions this could no longer be sustained as a credible ‘explanation’.

An interesting discovery by the Welch brothers was that many of the off-target missiles that fell outside London were those launched by the Germans at night.

Read why this might well have been, only in Iron Cross Issue 9, on sale on 30 June

26 July 2021
Tweets by The Armourer Magazine