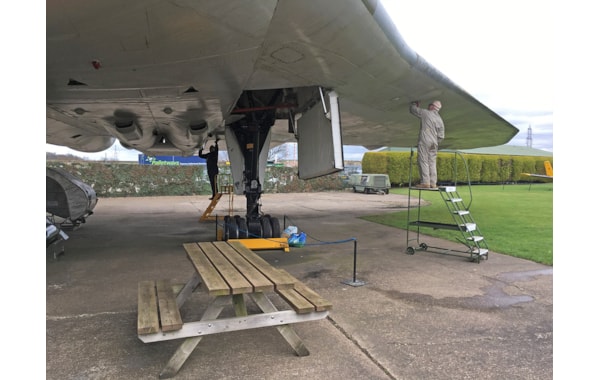 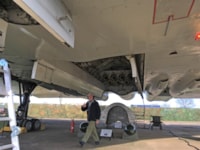 The refurbishment of Vulcan XM594 continues at Newark Air Museum despite the ongoing pandemic.

Despite the gradual lock-down of the UK in response to the Covid-19 virus work has restarted at Newark Air Museum on further restoration work on Avro Vulcan XM594. The distinctive wing shape of this former Royal Air Force (RAF) bomber is clearly visible in the accompanying photograph, which shows museum volunteers undertaking some awkward and tiring work on XM594.
Members of the Vulcan Repainting team have just started work on the underside of the port wing of XM594, which will progress throughout the year as and when the current health crisis allows access to the museum site in eastern Nottinghamshire. Last year the same team undertook similar de-corrosion work, surface preparation and repainting work on the underside of the starboard wing.
Elsewhere a lot of cleaning and renovation work has been undertaken on the aircraft, much of which has been focused in the aircraft’s cavernous bomb-bay. This work has seen the Vulcan Repair Team able to operate the Rover APU to once again start cycling the opening and closing of the bomb bay doors.
Avro Vulcan XM594 was flown to the former RAF Winthorpe airfield from RAF Waddington on Monday, 7 February 1983. At the time XM594 was the only Vulcan aircraft disposed of by the RAF that was flown into a non-licensed airfield.
More details at www.newarkairmuseum.org.