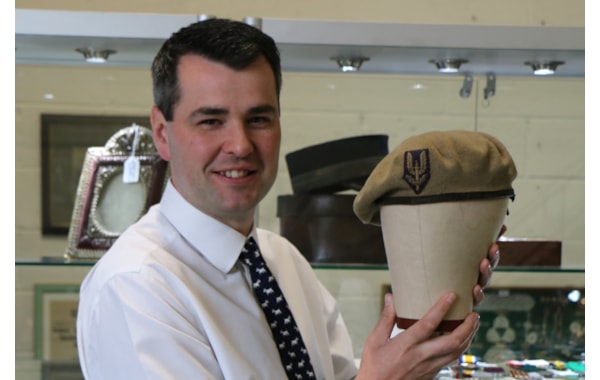 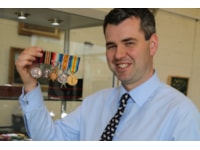 A record breaking WWII beret has sold for over £20,000 at a Suffolk auction.

A very rare World War II Special Air Service Regiment, sand-coloured beret fetched £21,700 in Bishop & Miller’s Military and Medals Auction which took place on 27 April at the Stowmarket salerooms, breaking previous records.
This high-selling lot which was sold to a collector based in Switzerland was included in Bishop & Miller’s specialist Military & Medals Auction. Other top selling lots included a collectable Siebe Gorman & Co divers knife which sold for £2,300. The impressive Norfolk Regiment DCM, MM, Mon’s trio World War I medal group sold for £2,400 to a UK-based medal collector. The specialist sale also included a recently uncovered large archive from a well-known pilot called Flight Lieutenant JH Liversidge DFC, AFC Royal Air Force, who was also pilot to the Royal Family. The medal collection included the pilot’s Distinguished Flying Cross (1958) and a number of unpublished photographs of the pilot with members of the Royal family, including the Queen’s Mother. This interesting lot sold for £5,200.
Oliver Miller, Managing Director of Bishop & Miller Auctioneers, said, “We had an exciting few days of auctions and our customers had certainly done their homework on many of our collectables with some exceeding estimates. The rare World War II beret was certainly our star lot, world record breaker nonetheless, and we had a number of competitive bids before the auction opened so we knew it was one to watch.”