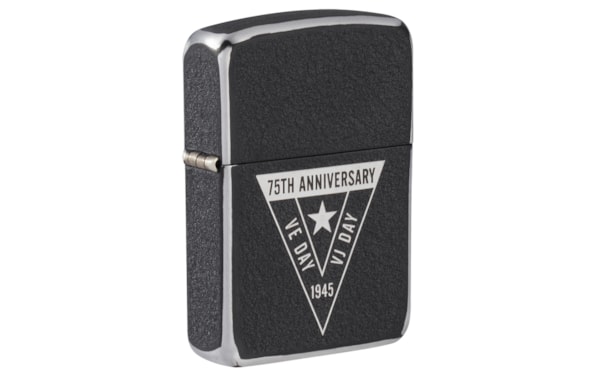 To mark 75 years since the end of World War II, iconic American brand Zippo has launched a replica of the Zippo lighter every GI wanted in their pocket.

During the war, Zippo’s production lines were dedicated entirely to the US military, cementing Zippo as the American icon it is known as today. Every lighter that the factory rolled out was bought by the military so that soldiers could buy them on US bases and in ship stores.

This exclusive 2020 replica celebrates Zippo’s heritage in craftsmanship and ingenuity. The brass, normally used to fashion Zippo lighter cases, was strictly rationed for munitions production so, with the massive military order to fulfill, the company started using stainless steel.

The steel lighter design is a 1941 replica of the trusty portable flame, including the lighter insert’s 3-2-3 windproof chimney pattern and the flint wheel; but with a lighter case made from steel instead of brass. The new design features the same black crackle paint finish as the original WWII version, which was used to prevent the lighters from rusting. The collectable’s edges have been given a worn look, depicting how frequently the original lighters were used and the impact of a lighter repeatedly being dropped into and pulled out of a serviceman’s pocket.

2020 marks 75 years since the guns fell silent at the end of WWII and people took to the streets to celebrate VE Day and VJ Day. All will remember it differently and for those that were around to experience it, this milestone anniversary brings a time of special commemoration.

Zippo’s Victory in Europe & Japan limited edition lighter comes beautifully packaged with an exclusive ration kit-inspired box, an information booklet containing celebratory stories of how the lighters were used in the war, and a steel product card. The limited edition run of 40,000 lighters will be available from June for £134.95.