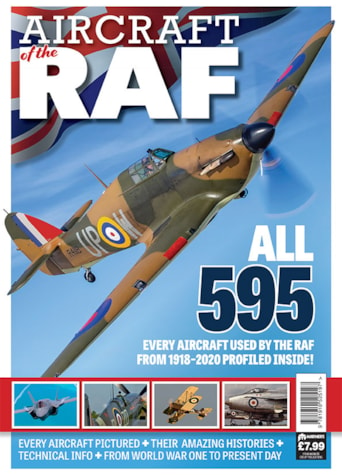 As the Royal Air Force (RAF) enters its second century of flying and defending the skies over Great Britain its fleet of aircraft remains diverse and eclectic.

Since the service was formed in 1918, the RAF has operated more than 590 different types of aeroplane, helicopter and seaplane. Aircraft of the RAF tells the story of all of those machines and the servicemen and women who have flown them, built them, maintained them or supported their operation in both peacetime and war.

Such iconic aircraft as the Spitfire, Vulcan and Tornado have important stories to tell, but unusual and mostly forgotten types such as the Manchester (the ‘flop’ that would lead to the development of the famous Lancaster), the Valiant (the unsung V Bomber) and the wonderfully named Beardmore Inflexible also played a vital part in the development of British airpower.

Aircraft of the RAF will feature a useful timeline detailing the introduction into service of each of RAF’s aircraft – from the Airco DH.4 of 1918 to the latest Boeing P.8 Poseidon; the first of which is expected to be delivered in late 2019.

The editorial team of experienced aviation authors also focuses on a variety of the more interesting or unusual aircraft in more detail; giving insight into some of their lesser-known stories and remarkable capabilities. Subject matter includes fighter and bomber aircraft from the Great War, World War Two, the Cold War and more recent conflicts in the Gulf and Afghanistan as well as training aircraft, cargo flights, helicopters and even the RAF’s fleet of racing aircraft that won the Schneider Trophy for Britain in the 1920s and 30s.

Lavishly illustrated with both modern colour and period B&W images, Aircraft of the RAF combines detailed research with a mix of unusual and quirky stories that reveal the human side of service. It is intended to appeal to both enthusiasts and those with a passing interest in aeroplanes.

Pre-order your copy today but please be aware that any pre-orders will not be dispatched before the on sale day of Friday 28th February 2020.